Proud History, Growing Future – that’s been the vision from the beginning.

Long before there was a Seven Islands Land Company, there was a man, and a family, with a vision for Maine’s timber industry. Here since the beginning, the sustainable forest management principles that governed the early days still lead the company today: manage the land sustainably for generations to come.

Land speculation fueled the nation’s expansion from the very start.  Maine’s early statehood was no different.  David Pingree, Sr., a successful shipping merchant from Salem, Massachusetts, invested in Maine’s timberlands in the mid-1800s as a means of diversifying.  Today, the timberland legacy lives on, with the family owning over 820,000 acres of timberland in Maine.

The Lumber Capital of the World 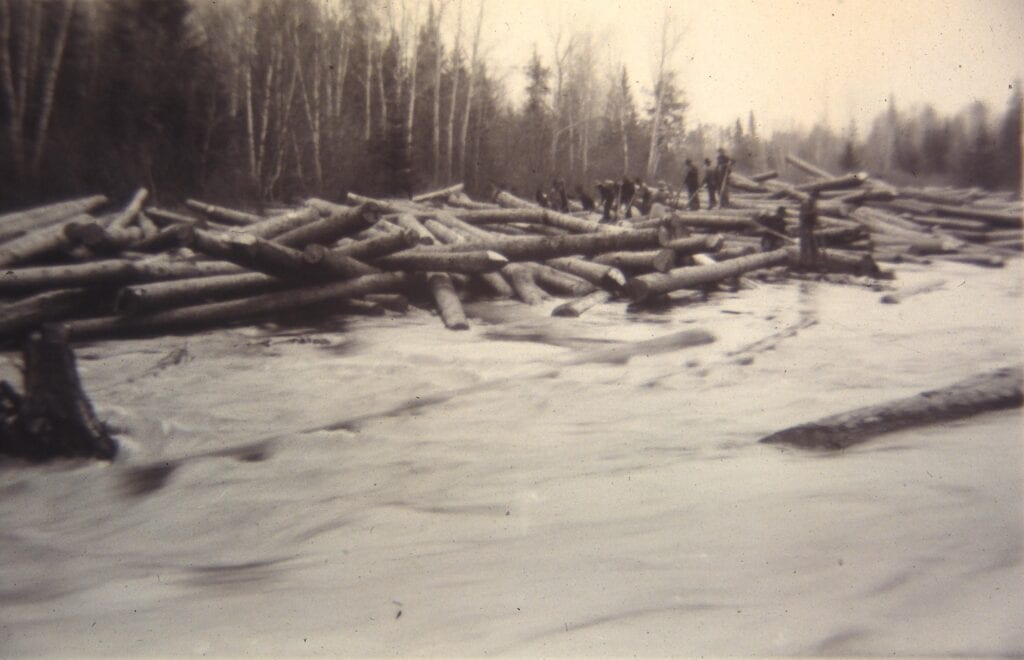 White pine was king when Ebenezer Coe was selected as Pingree’s land agent, becoming Coe & Pingree, based in Bangor, Maine, then known as the Lumber Capital of the World.  It takes a lot of moving pieces to build a system that moves lumber from the remote Maine woods to the river, to the mill, to the market, and this is exactly what they designed and built.  Coe & Pingree led the effort to establish overland supply and hauling routes, built supply depots such as Chamberlain Farm, oversaw log river drives, and shipped their logs to awaiting markets.

Grow Trees as well as Harvest Them 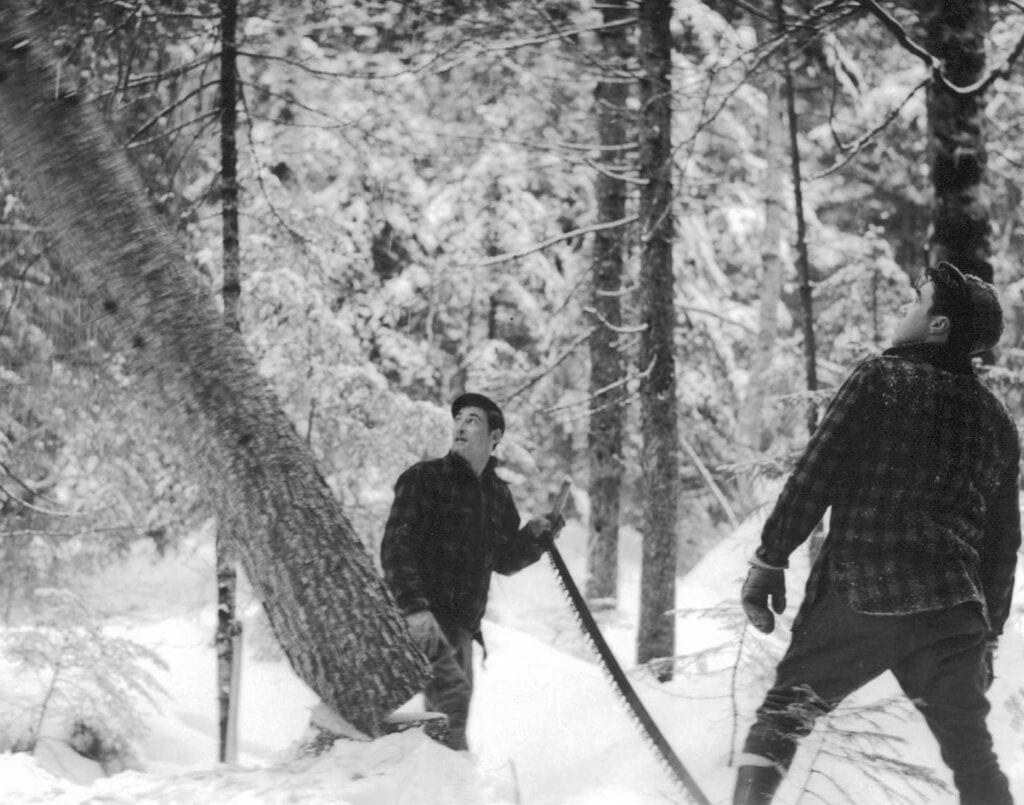 David Pingree, Jr., stepping into leadership after the passing of his father, was heavily influenced by the progressive, conservationist, and silvicultural theorists of the day.  Pingree, Jr. “was one of the first timberland owners committed to growing trees as well as harvesting them. He established the family’s conservative mindset for land management: sustained yield to insure a continual supply of trees, selective cutting, and protection of streams from erosion.” – Phyllis Austin, Maine Times, August 15, 1975.

From White Pine to Spruce 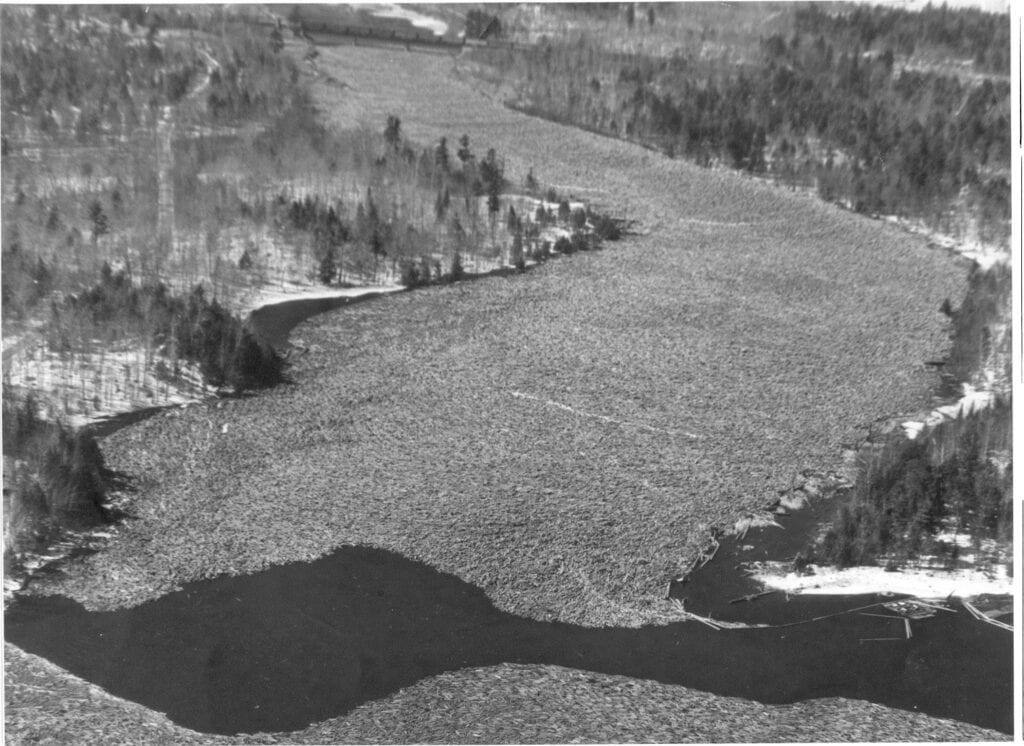 As the nation grew and changed in the 1850s and 60s, the markets shifted from love of Maine’s white pine to the urgent need for spruce lumber.  Social change and technological growth was carving out a new forest industry.  With timberlands stocked with spruce and the necessary supply chains in place, Pingree lumber came over Maine’s waterways to eventually build railroads, mills, factories, and housing throughout New England and the United States.

Ahead of the Times 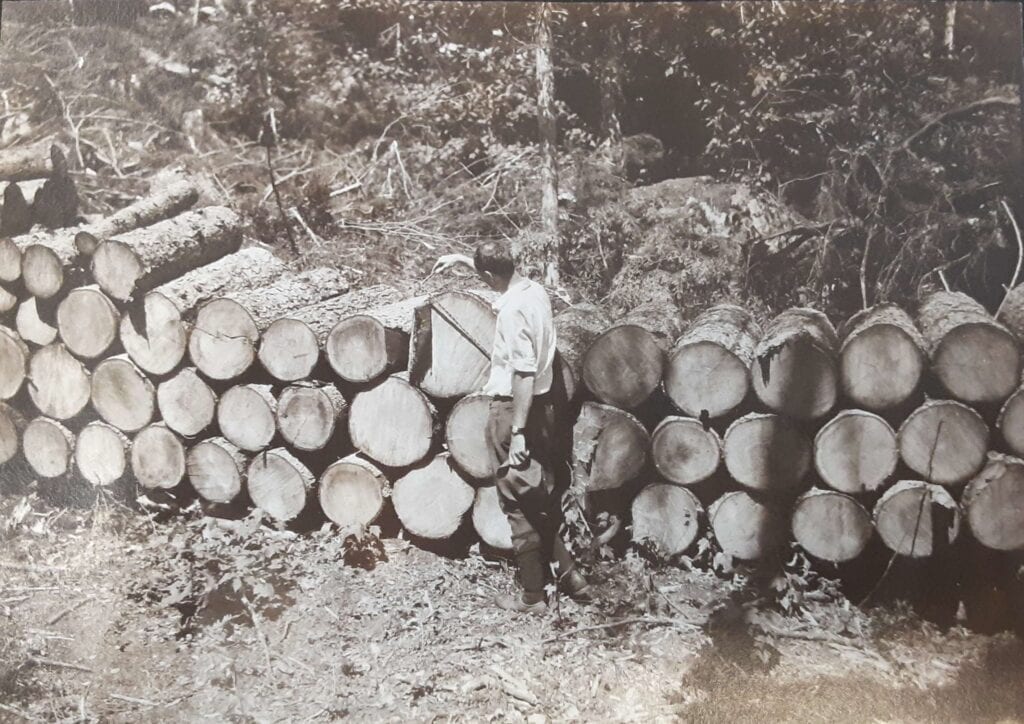 In the 1920s, Pingree agents embraced technological innovation and the burgeoning scientific approach to understanding the world and the business of forestry.  They documented operating activities, initiated mapping methods, and created detailed timber inventories.  The photography of the land, the people, and the methods used at that time remain a valuable record of the early 20th century lumber industry.  Ahead of their time, these methods were later adopted widely in woodlands management. 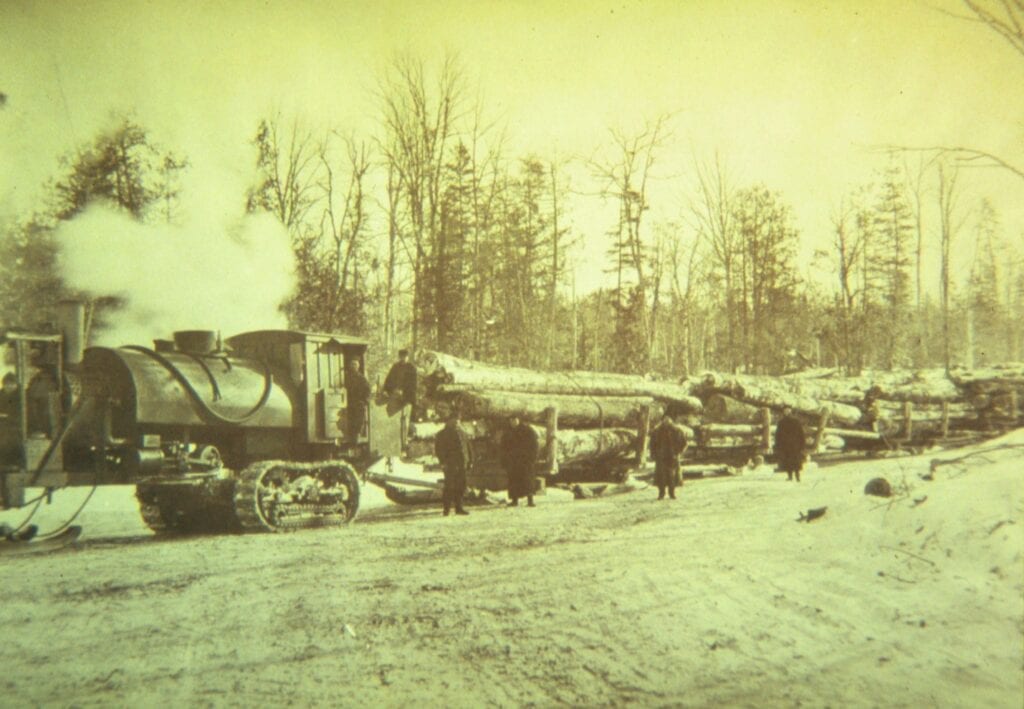 The late 19th century brought softwood pulp papermaking to Maine.  With an inventory of softwood and ready water resources, Pingree timberlands supplied mills throughout the state.  Four foot red, white, and black spruce pulpwood was swirling down the rivers to giant paper mills in Berlin, Millinocket, Jay, and Rumford.  The four-foot wood was hauled out of the woods on sledges to streamside landings by teams of horses, Lombard Steam Haulers, or tractors. Spring river drives were common, although some wood was beginning to be loaded onto trucks for a bumpy ride out of the woods on rough, icy roads. 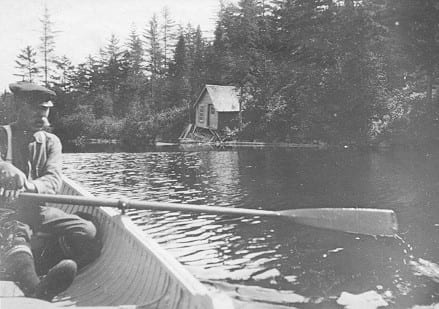 The rusticators, vacationers, and day trippers have been following tote roads into the Maine woods to enjoy the views, the climate, and the recreation possibilities for decades, not always to the betterment of the environment.  To help facilitate the enjoyment of private Maine timberlands, the Pingree family made the decision to lease land. Beginning in the Richardson Lake area, tracts were leased to sporting camps and for recreational use.  Careful recreational planning, and continued Pingree family ownership, has ultimately kept large tracts of forestland from commercial development, all the while still providing a continual supply of forest products for public benefit. 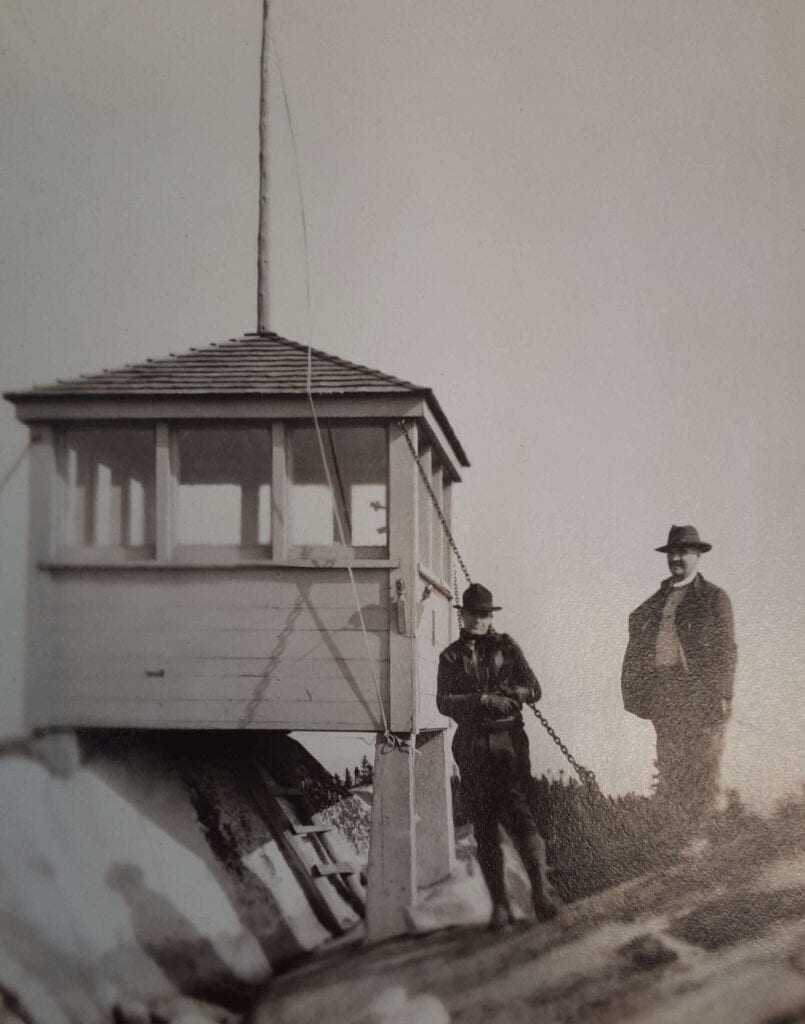 The Maine woods were opening to more and more people for more and more reasons.  Homesteaders used fire to clear land quickly.  Vacationers built campfires for warmth and cooking.  Woods crews and pulp and paper operations inevitably brought machinery and sparks to summer heat parched forests.  With the growth of more people in the woods, the danger, and instance, of forest fires grew.  Hosea Buck, Pingree land agent, designed a fire protection system linking lookout towers and fire control crews to curb the threat that fire poses to the forest.  This early system was to become what we know today as the Maine Forest Service. 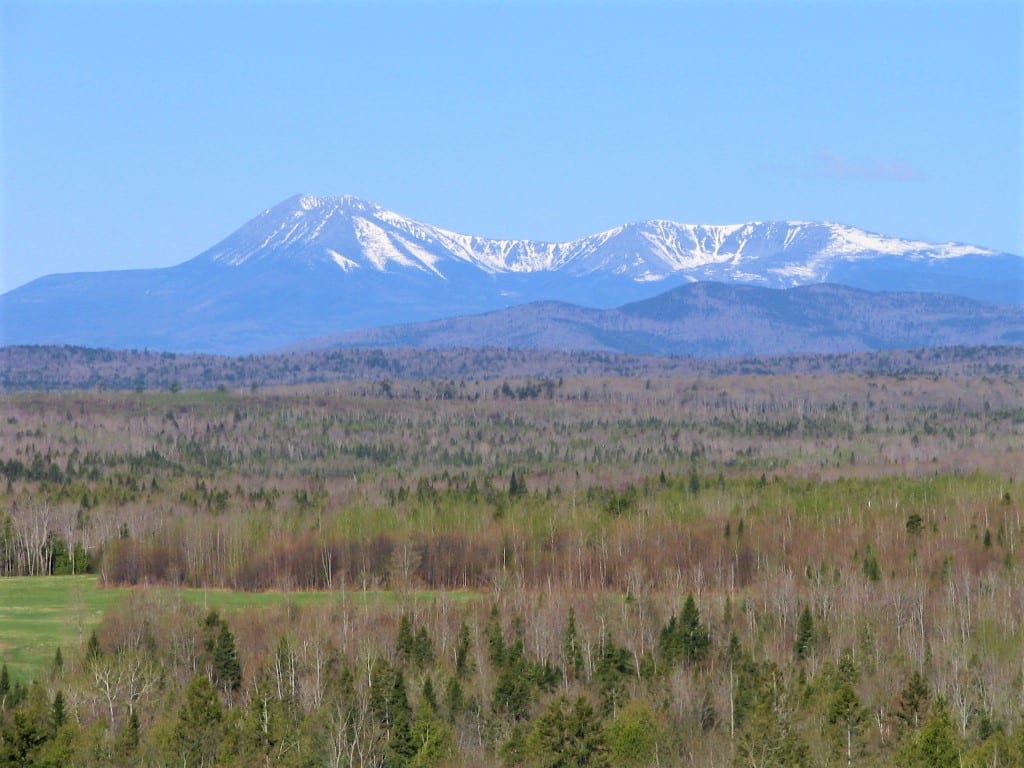 Mainers take the future of their state very seriously.  Governor Percival P. Baxter was determined to preserve a vast tract of land near Mount Katahdin and spent decades, and millions, to buy contiguous acreage.  The Pingree family deeded ownership of several Penobscot County tracts of land to his cause. Later, Baxter’s combined acquisitions were given to the State of Maine for the creation of Baxter State Park. 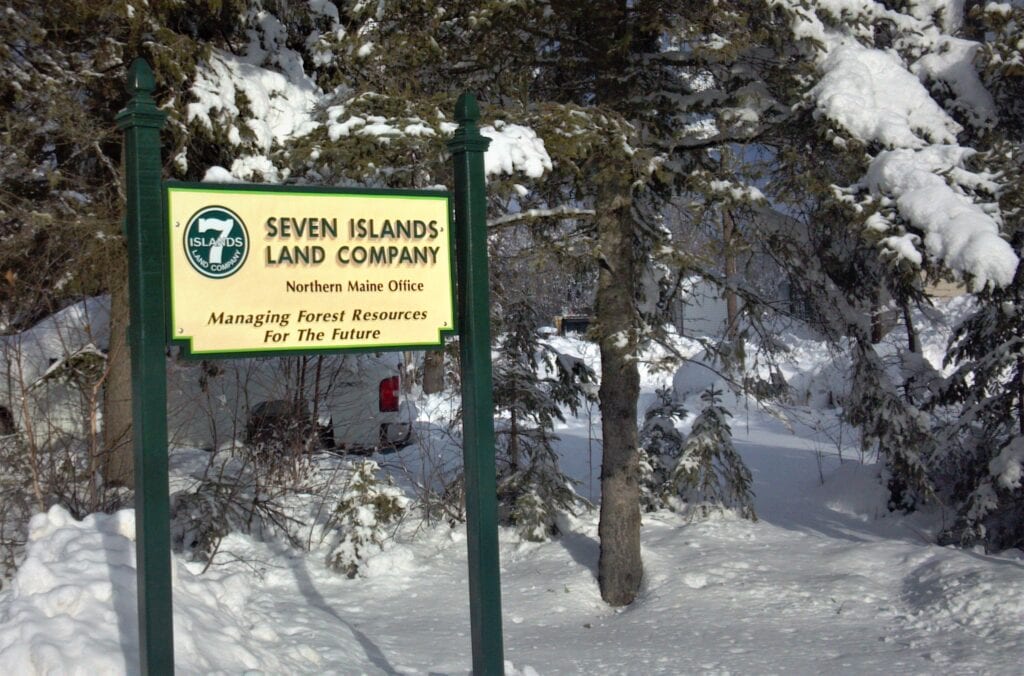 Formalized to manage the timberlands owned by the Pingree family, Seven Islands Land Company was incorporated in 1964. The company’s main charge: uphold the stewardship principles long held by the family while navigating an ever-changing forestry industry.  In other words, maintain the Proud History and ensure a Growing Future.

What’s in a name?  The roots of the Seven Islands name run deep in the history of the Maine timber industry. Seven Islands was originally a northern Maine farm and depot on Pingree land on the St. John River, situated thus to supply provisions to logging camps.  Similarly, the occurrence of seven islands pops up throughout the Pingree timberland holdings. 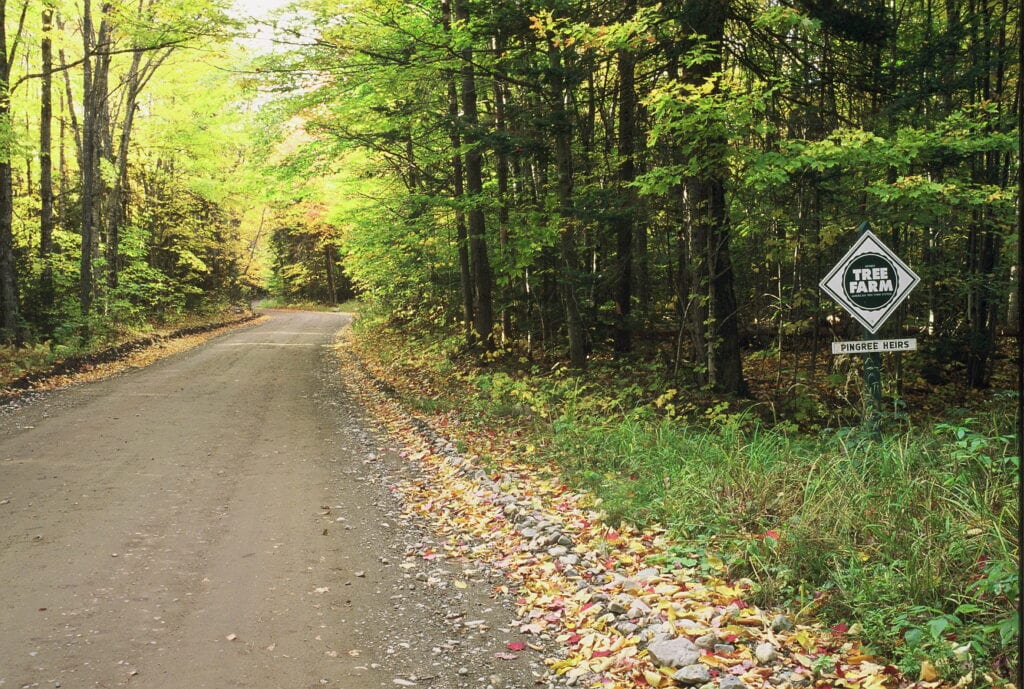 Pingree Timberlands was one of the first Maine ownerships to sign onto the national Tree Farm Program, a system that encourages landowners of all sizes to sustain healthy forests, watersheds, and wildlife habitat.  Participating landowners are periodically audited to ensure their actions are consistent with the program’s vision.  In 1968, the Pingree forest was awarded the Tree Farm Award, and the Pingree forest remains a legacy member to this day. 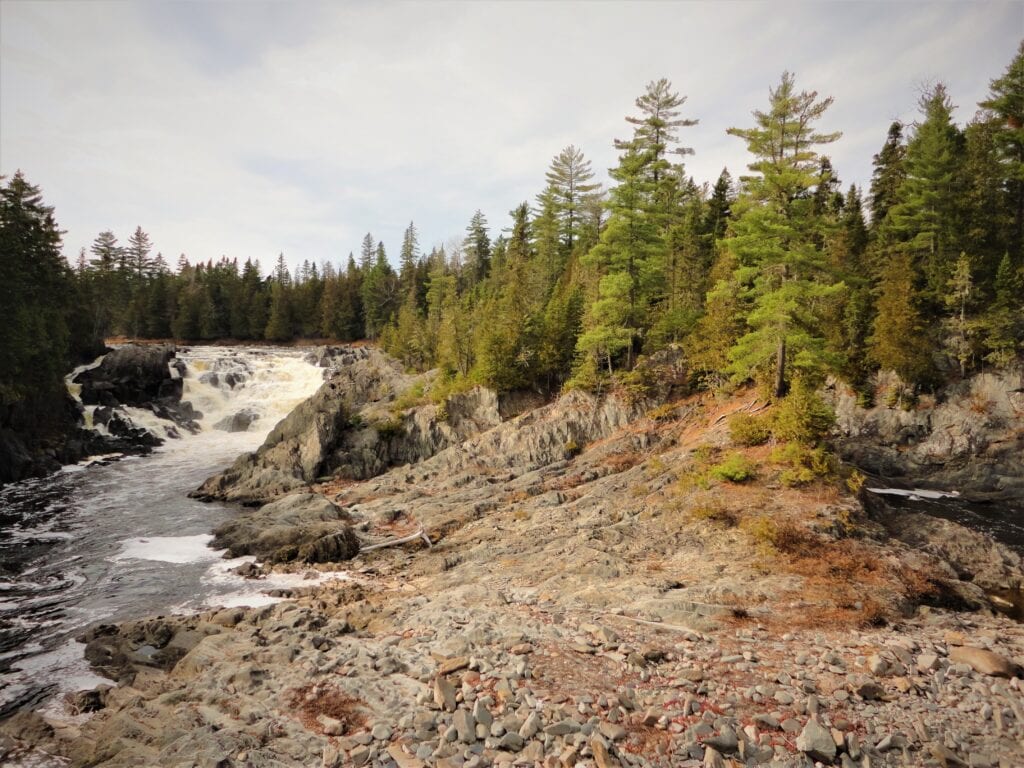 The working forest has actually made it easier for nature enthusiasts to get away from it all.  The building of roads through the Maine woods means more and more people have access farther and farther off the pavement.  And while that may be good for the soul, increased numbers on private timberland needs a great management system.  North Maine Woods was founded as a cooperative effort of several regional, private landowners, including Seven Islands.  This system of perimeter checkpoints, campsites, education, and rules allows North Maine Woods to effectively and safely manage public recreation on 3.5 million acres owned by many landowners, large and small.

Where the Wild Things Grow 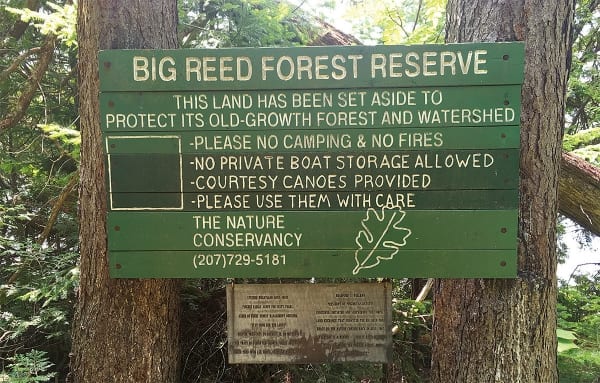 Northwest of Baxter State Park sits a 5,000 acre parcel of protected virgin forest, undisturbed and never logged.  Understood as significant, Pingree and Seven Islands’ representatives labeled this parcel as protected well before the legal status was in place.  Created through an effort between the Pingree family, The Nature Conservancy, and the State of Maine, the Big Reed Forest Reserve is the largest contiguous tract of old growth east of the Mississippi River and two-thirds of New England’s remaining old growth. 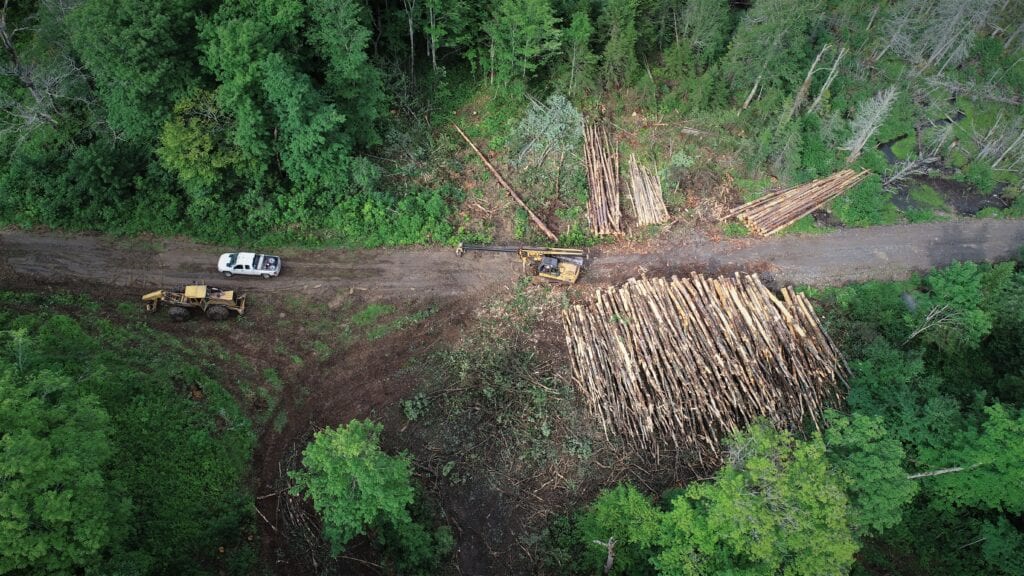 Seven Islands became a leader in certification in 1993 when it was named the largest Certified Well-Managed Forest in the northern hemisphere, under Scientific Certification Systems’ (SCS) “Forest Conservation Program.” Since that time, we have maintained that certification with yearly audit opportunities under both the Forest Stewardship Council (FSC) and Sustainable Forestry Initiative (SFI) programs. Certification demonstrates our long-term commitment to the health of the forest, environment, and to the communities in which we live and work. 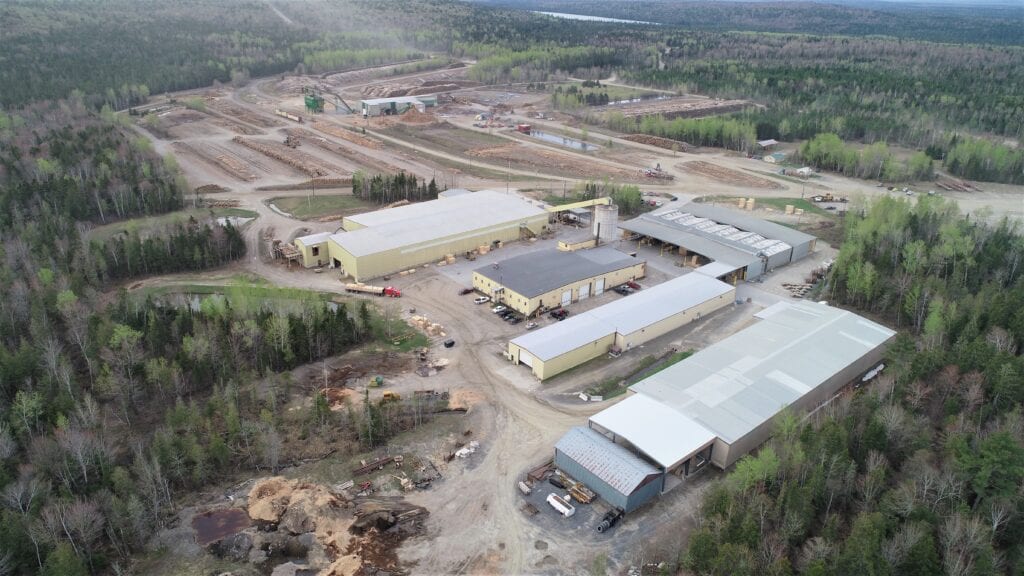 Recognizing the presence of a highly valuable and underutilized mature hardwood forest in the northern woods, Maine Woods Company was built in 1999 to produce high-quality hardwood lumber from logs harvested on the family’s lands and the greater region. 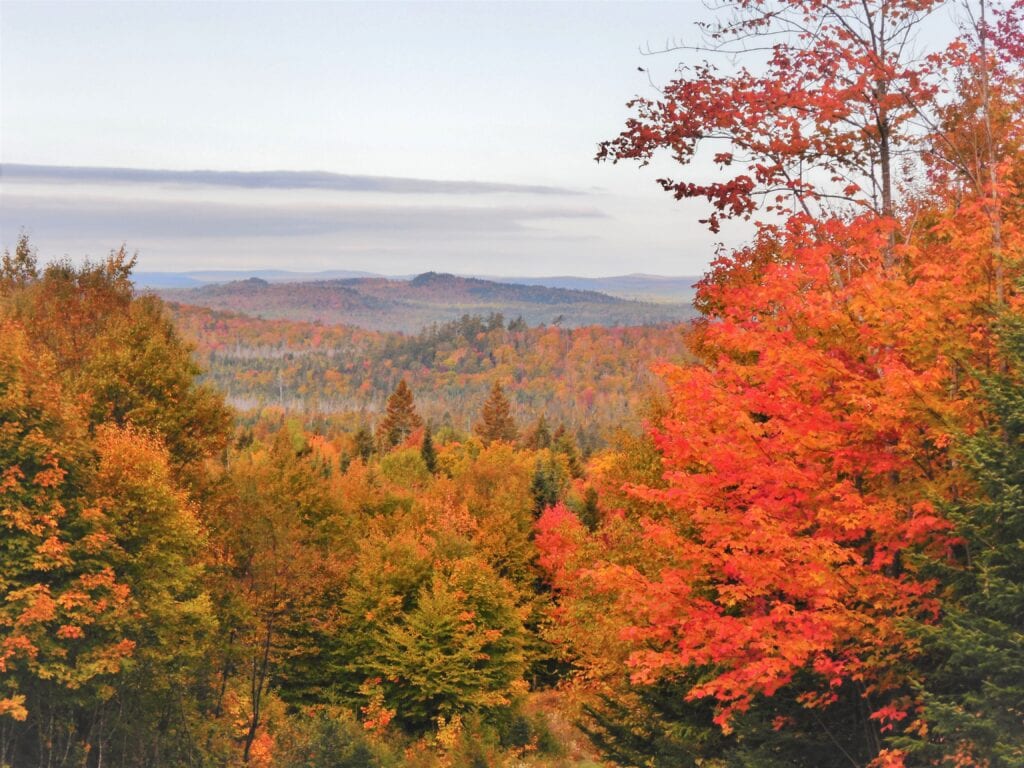 The Pingree family finalized a deal with the New England Forestry Foundation in 2001 to conserve in perpetuity, more than three quarters of a million acres, including 110 lakes and ponds, 2000 miles of river frontage, and wildlife habitat.  Cementing our resolve for the future of the timberland, “The idea of the easement was a ‘win-win-win.  This was a case where it worked for the private landowners, it worked for the environment, and it worked for the public that can continue to enjoy the property.’” – Steve Schley, Pingree Associates. 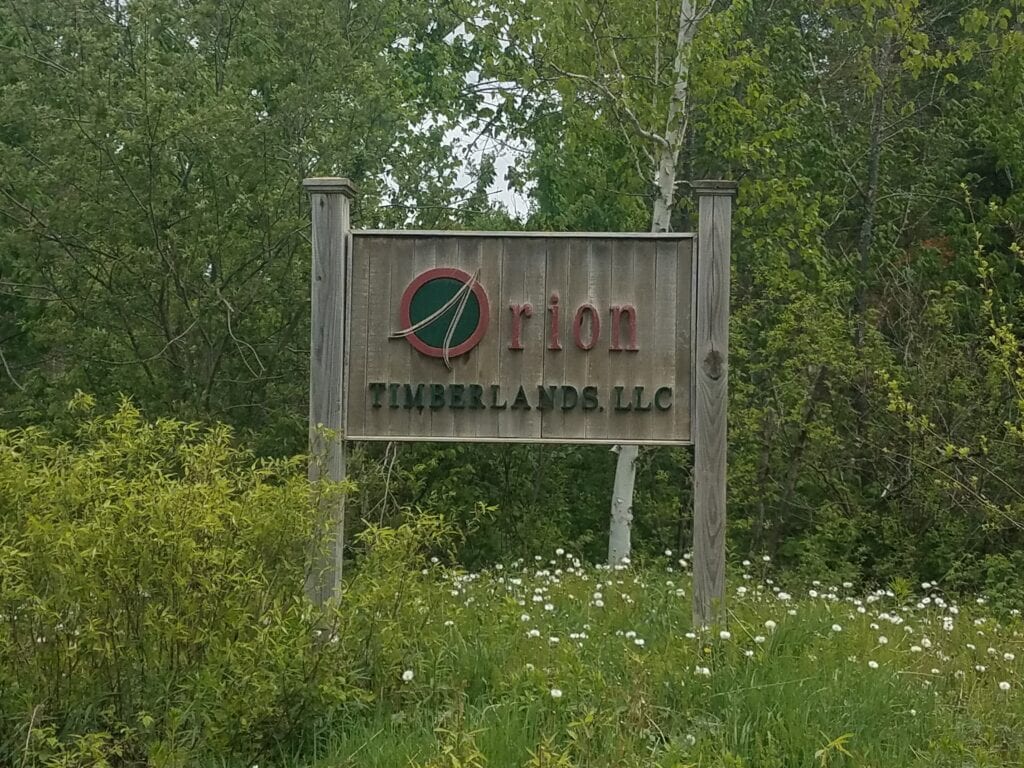 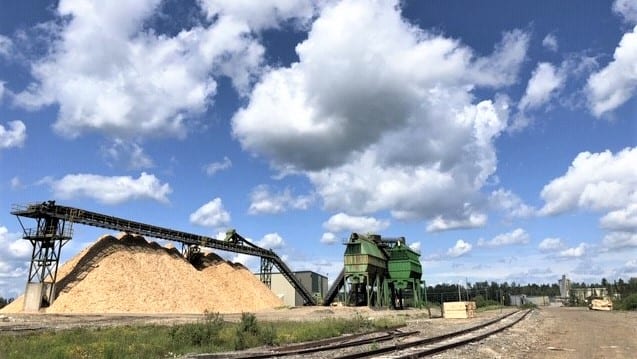 As another testament to our commitment to forest certification, in 2019, Seven Islands was honored by the Forest Stewardship Council for 25 years of Certification under the program at the annual FSC event held in Atlanta, Georgia.